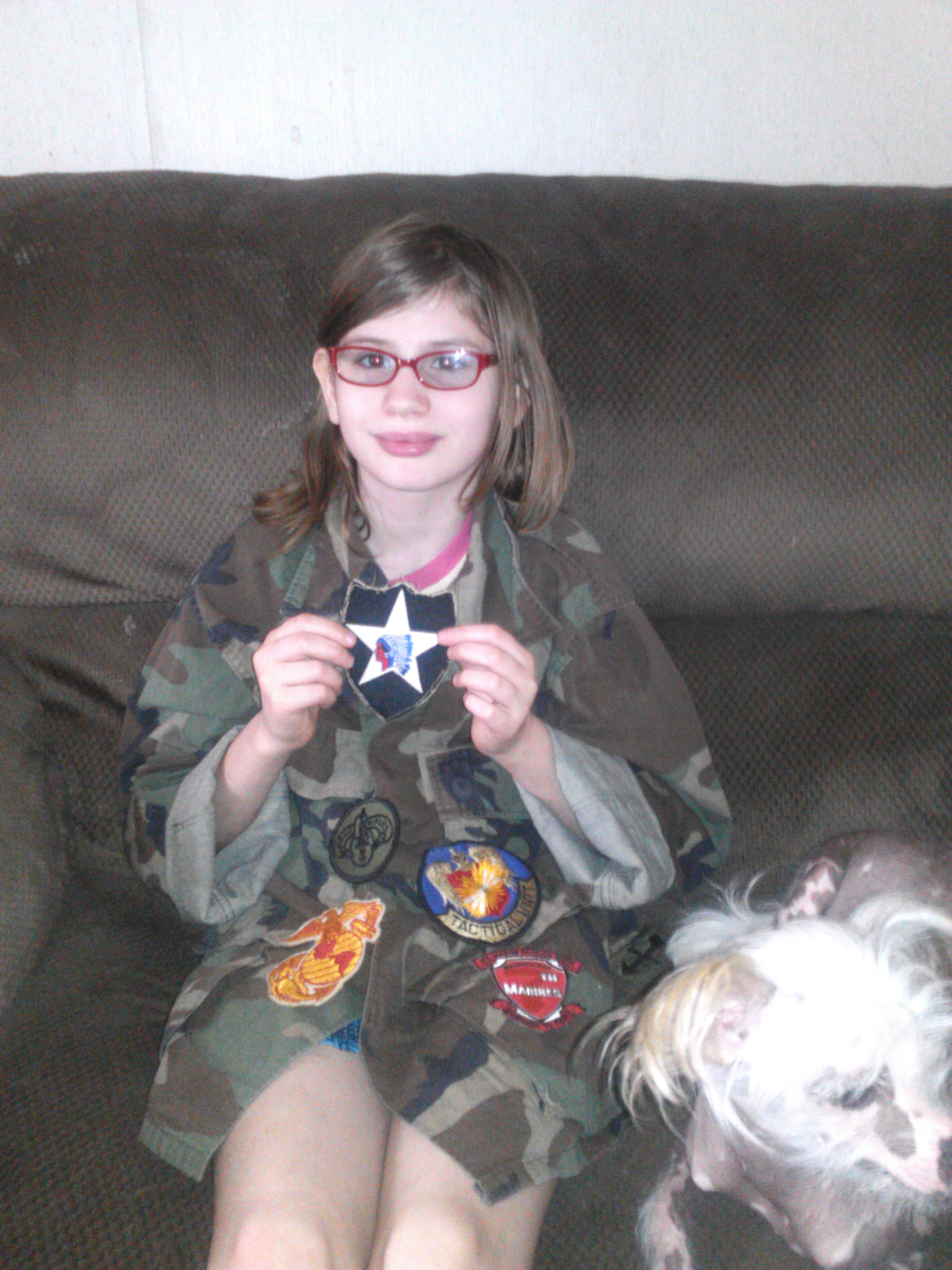 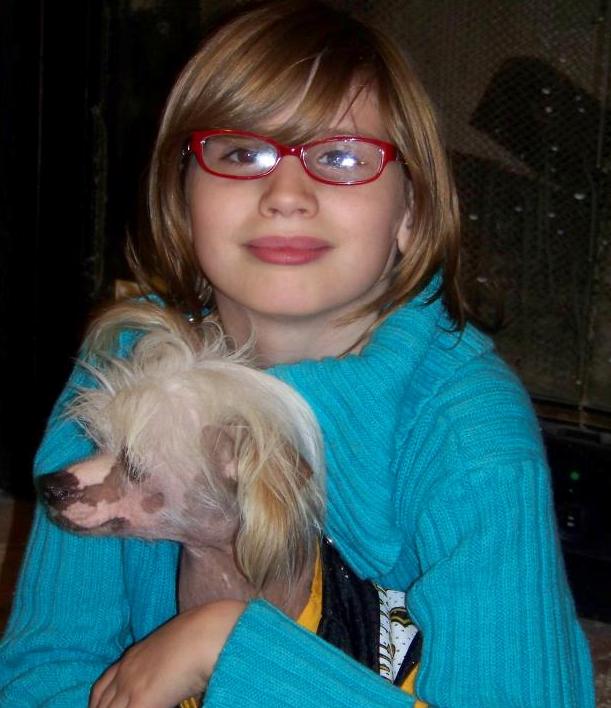 Kaya is a little girl who loves her dog.  All children love their dogs, but Kaya’s is special; her dog, Cotton Candy (named that because she is a Chinese Crested, hairless and literally pink like the carnival favorite) is a service dog. Kaya has a chronic pain disorder which causes her to hurt continually; she has seizure and frequent migraines as well as high functioning autism. Cotton Candy was sent to her by the generosity of many caring people who ensured this unique dog was given and transported at no cost, although the costs for this breed, as well as being specially trained, are very high. Since receiving the little dog, Kaya’s migraines have dropped to just a couple times a month, the black-out spells have stopped and her pain has been visibly reduced.

Kaya is also a little girl who loves our veterans.  Both of her parents served in the military, as have the majority of her family members.  Veterans are very important to Kaya, and Cotton Candy has done so much for her, she associates the two.   As Cotton Candy will be wearing a service vest, Kaya wanted to decorate it with patches from the military. Instead of just buying them, she told her mother that she would love to have a few patches from real veterans!  And with that request, the most amazing outpouring of love and support began. 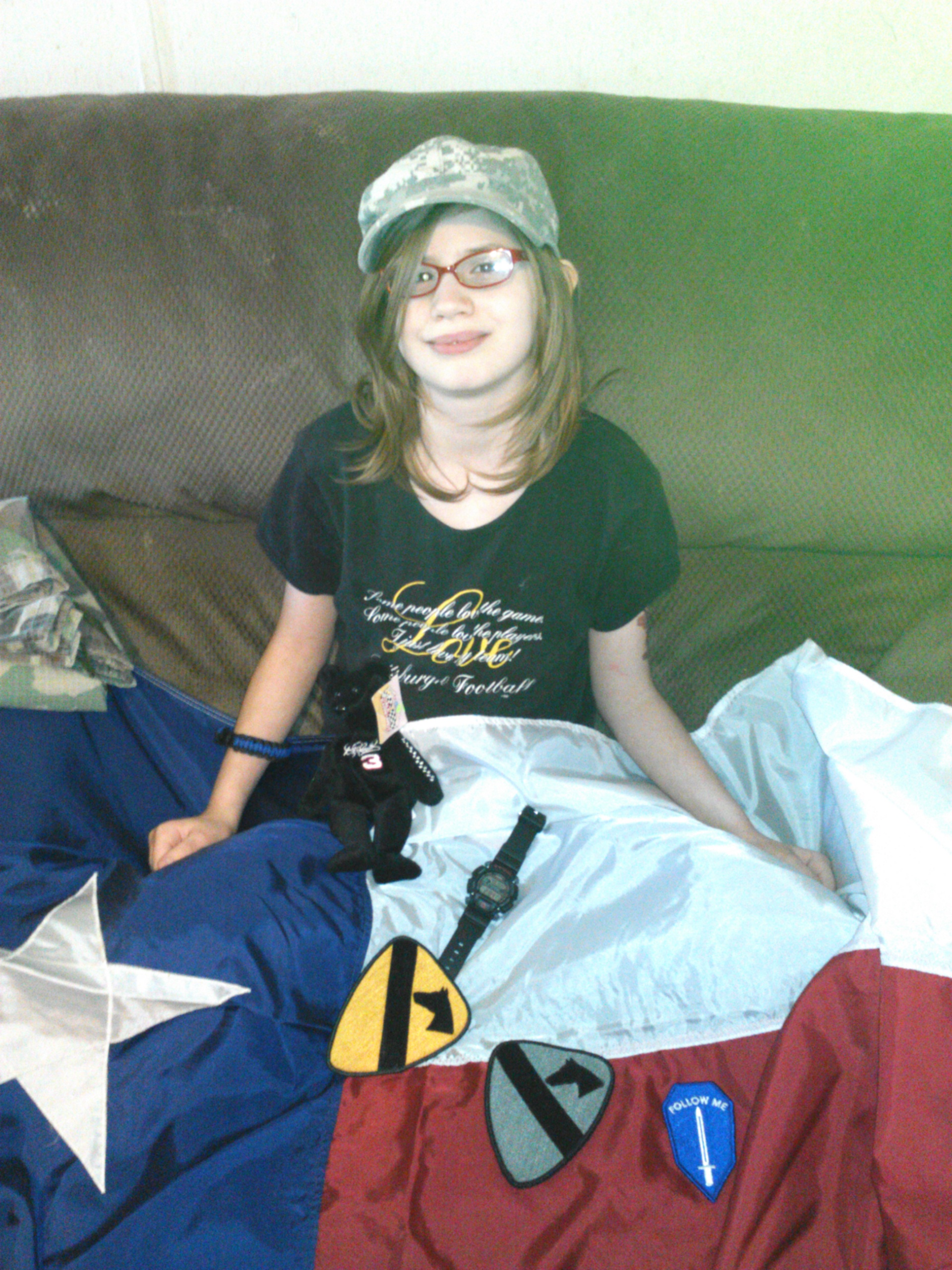 Throatpunch Dianne Feinstein is a Facebook page which is about stopping the infringements on our Second Amendment. (That is what a throatpunch does; stops you in your tracks.) When the founder of the page, whose handle is “Outlaw”, learned of Kaya’s condition and need for military patches, he sent out a message to all of his page followers, most of which are veterans, to support this little girl.  Outlaw is a veteran himself, serving in the Army, and he not only mailed Kaya some of his service patches, but also included a Texas flag, a teddy bear and even a G-shock watch, remembering how much he wanted and waited for one as a child.

Warfighter Alliance is another Facebook page (one which supports the military) that got involved and even dubbed it, “Operation Big Smile.”  The founder of this page told Kaya’s mother, “She will have more patches than she could ever use!”   That has proven to be a true statement.  Kaya has received a patch from Afghanistan taken right off the uniform which had been on 100+ missions. One patch even came from an Afghani troop our service members are there to train. Another package came from a World War II veteran, Tom Evans, who also sent all of his dress uniform medals as well as a book he wrote, called “Hold your head High Marines:  Stories from G-2-5 Marines who 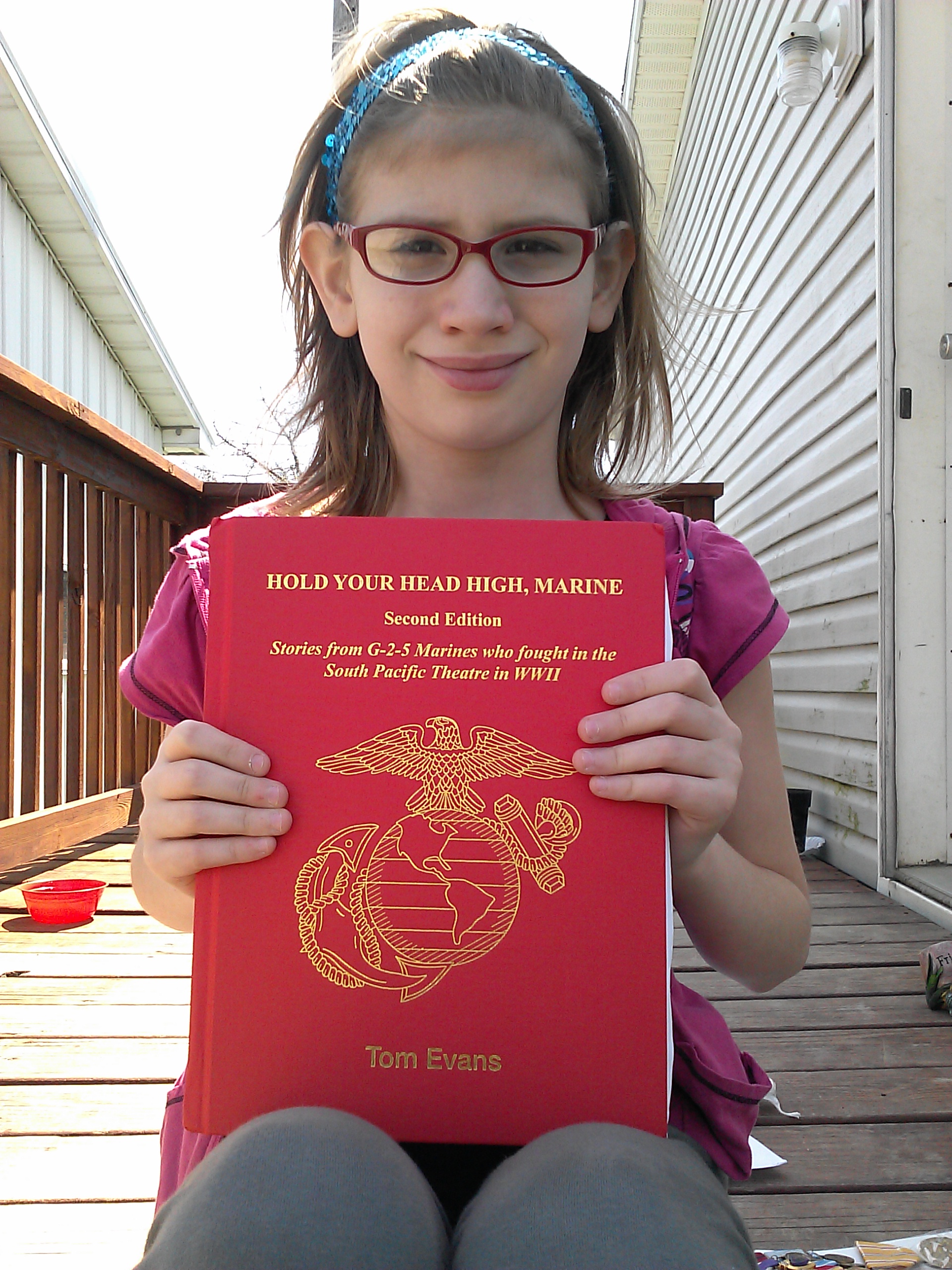 fought in the South Pacific Theater in WWII” with this special message:

Thank you dear for caring about these old veterans. I hope you will enjoy reading how a group of teenagers helped save the freedom we share today. All veterans love you.

Tom Evans, a Marine during WWII in South Pacific and Korea

Kaya has received 133 patches so far with more on the way, including one from Germany and another from Afghanistan.  Most of the packages include other gifts and she has been told there is a vial of sand from Iwo Jima coming soon.  There are far more patches than can fit on the vest for an 11 pound dog so Kaya’s mother plans to make a quilt to feature the others.  It will be a profound keepsake which will always remind Kaya how much she is loved…. And is a monument demonstrating to us all the huge hearts of our protectors.

Having been given so much love and support, Kaya is in a position to return the kindness to her real heroes.  Service dogs are powerful therapy for veterans with PTSD and can help our heroes who are struggling with battles after the war as effectively as Cotton Candy has improved Kaya’s life!  As Kaya’s dog wears this vest, it opens conversation about service dogs and gives Kaya and her family the opportunity to talk about the love from and needs of our heroes.  Raising awareness and working to ensure that veterans who need them are able to be given service dogs is now Kaya’s mission.  Kaya says,  “Just because I’m a kid, doesn’t mean I can’t make a big difference!”

This story shows the deep love our veterans feel for those they have protected; a love which never stops. With such statistics as a suicide rate of 22 per day, it is clear that we are not returning the love and support our heroes have given us. It is time to change that! Join the national campaign, Love Your Veterans, and let our protectors know how much we appreciate and support them!

(If you are interested in sending patches to Kaya, message us here at Love Your Veterans with your email and we will provide the address)